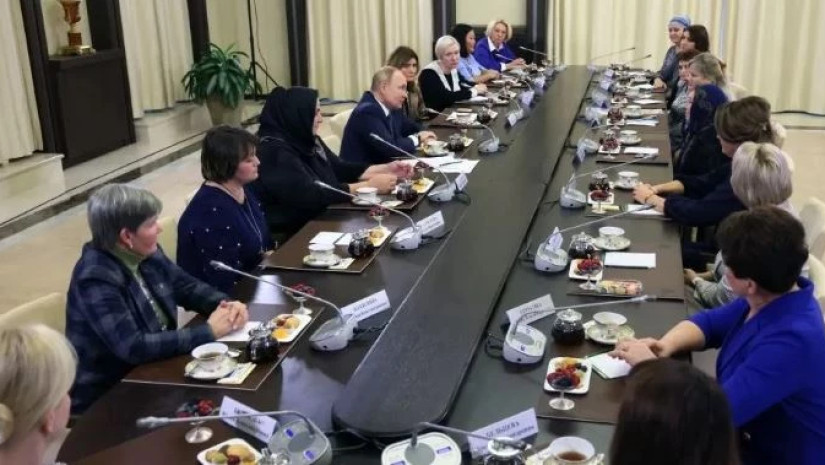 "We share your pain," Russian President Vladimir Putin has told a group of mothers of Russian soldiers who have been fighting - and some of whom have been killed - in Ukraine.

"Nothing can replace the loss of a son", he said in his opening remarks, shown on Russian state media.
Several of the mothers are members of pro-Kremlin movements. Critics say they were carefully chosen for the meeting.
Within Russia, opposition to his invasion of Ukraine has been growing.
Across the country, groups of mothers of serving soldiers have been openly complaining that their sons are being sent into battle poorly trained and without adequate weapons and clothing, especially as the bitterly cold winter sets in.
Some have also accused the Russian military of turning those forcefully deployed into "cannon fodder", following a string of heavy military defeats in recent months.

Around 100,000 Russian and 100,000 Ukrainian soldiers have been killed or injured since the war began on 24 February, according to the most senior US general, Mark Milley.
In a rare admission, the Kremlin said in September that mistakes had been made in its drive to mobilise army reservists.
What is Vladimir Putin thinking and planning?
At Friday's meeting at his state residence near Moscow, Mr Putin was shown sitting at a large table with a group of 17 mothers. Some of them wore dark headscarves - a symbol of mourning.
"I want you to know that I personally, and all the leadership of the country, we share this pain," the president said.
He told one mother her son had "achieved his goal" and "didn't die in vain".

Mr Putin said he wanted to meet the mothers face-to-face to hear from them first-hand about the situation on the ground.

And he revealed that from time to time he was speaking directly to Russian soldiers on the battlefield, describing them as "heroes".
The president also urged the women not to believe "fakes" and "lies" about the raging war on TV or the internet.
While getting balanced news on the situation in Ukraine is difficult in Russia because of the Kremlin's control over the media, many people have turned to using virtual private networks (VPNs) to bypass the censorship.
In a transcript of the meeting released by the Kremlin hours later, several of the women were identified as being part of pro-Putin movements.
The women were from different parts of Russia, it said, with at least one from the self-proclaimed Luhansk People's Republic in eastern Ukraine, which Moscow declared annexed earlier this year.
A member of the Kremlin-backed All-Russian Popular Front was also there as well as a participant of the Combat Brotherhood organisation, which collects humanitarian aid for Russian soldiers.

A lawmaker from the governing United Russia party was also at the meeting, according to some opposition media outlets.